Today for breakfast I had Jenny’s porridge with homemade hempseed milk, it may sound like this is a huge process but it barely took any time or preparation. For the recipe check out Jenny’s website.

First I made the hempseed milk quickly in my high-speed blender. Instead of using agave nectar or maple syrup (to me personally agave is sketchy arguably raw and maple syrup is not raw) I used Coconut Nectar by Coconut Secret.

I have a Blendtec and hit the “Whole Juice” button on my machine.

If you do not have a high-speed blender the seeds may not completely blend. When finding yourself in that type of situation use a nut milk bag or cheese cloth to strain the remaining seeds. But since this hempseed milk is already being used for a seed porridge it’s perfectly fine! No worries 😀 I had enough hempseed milk leftover to use for another recipe or day. As mentioned by Jennifer this seed milk lasts for 5 days in the fridge tightly sealed. I used a mason jar to store mine, this is super helpful for when I plan to use the “milk” again too because it will need to be shaken/stirred. 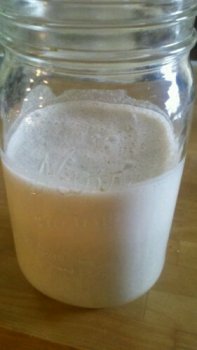 While preparing the porridge I let the hempseed milk stay closed tight in my blender pitcher. I did this to keep any built up heat from blending, this way the “milk” is warm like a cooked porridge.

Jenny’s porridge consists of several options of seeds and nuts. Flaxseeds, Sunflower/Pumpkin/Sesame Seeds, and Chia or Hempseeds. For my porridge I used brown flaxseeds, sprouted sesame seeds and chia seeds. The recipe calls for these all to be ground. I currently do not have a grinder for seeds and nuts where I am staying. I already had ground brown flax seeds around however. With the sesame seeds and chia I just pressed them down with a knife on its side. The most important seed and nut here to have ground is flaxseeds, they absorb best this way. Grinding all of these would add a proper porridge texture and mouth feel.

The ground seed mix is blended with cinnamon, optional maple syrup or agave (I used just a little coconut nectar) and sliced fruit. Jennifer recommends gradually adding in the hempseed milk and whisking it all together. Then topping it off with maple syrup or agave nectar. This “topping off” adds a wonderful appearance to the porridge, extra smooth, warm and it does give an extra boost to that cooked appearance.

I topped by porridge off with some sliced strawberries, wild blueberries and a small sprig of mint. I freshly grated cinnamon on top and was completely in love with the appearance, taste, texture and how amazingly full I was after wards. A few other ideas on how to mix this recipe up; ginger, turmeric, nutmeg, pumpkin spice blend, goji berries, mulberries, cacao, mint extract or any essential oils, carob, coconut oil and golden berries.

All of these seeds expand in the stomach helping us all feel satiated, energized and guilt-free. I like that Jennifer has several ideas/options for the ground seed mix and fruits to add into the porridge. This keeps things fun, easy and for me personally the more flexible a recipe is the more likely I will continue making the dish. I am sure I will have this porridge again soon! It was ideal on this foggy, lazy and chilly day to have something warming, thick, sweet, with a little kick from the cinnamon.

I think it took me less than 15 minutes to prepare this breakfast making it truly a “Raw In A Rush” meal. Thank you Jenny for this wonderful recipe! Jenny has other great recipes and resources on her website, I invite you all to check it out. Much love ❤ and raw power 😉

Veganism & Relationships. I Am Moving Back To The East Coast AH! »
« Just A Few Suggestions On Items To Juice Daily <3 Eat A Rainbow, Rotate & Ask To Sample Produce. Juice Recipe Share :D!