Today is my day off and that typically means driving to Providence to hit up Wildflour, Whole Foods and some vinyl or vintage shops on the way home. I woke up pretty early this morning, managed to sneak in an hour more of sleep before giving up and getting showered. I have this tendency to dress up when I’m having a tough week, if it’s my day off, or any other excuse I can come up with. So I got dolled up, went to my job for some apples & bananas to test out some juice recipes and headed to Providence from there.

I ate a Go Raw Spirulina bar for breakfast, about 8 oz of orange juice & 12 oz of filtered water. Go Raw’s Spirulina bar mostly tastes like banana (I usually compare it to a banana bread cookie to customers), the sesame seeds and coconut makes these bars crunchy and chewy. Spirulina is a wonderful source of protein, boosts your immune system, beneficial for people with allergies & can improve ones vision. 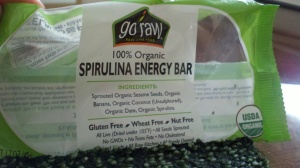 Orange juice is an easy go to coffee replacement or extra kick in the butt in the morning. It’s loaded with vitamin c, fiber, folate & potassium, vitamin b1 (thiamin); which most vegetarians and vegans lack vitamin b’s because they do not consume meat but is easily found in fruits, veggies, and in supplement form.

When I arrived at Wildflour a vegan juice bar, bakery & cafe I picked up a slice of their raw lasagna, a small Kermit juice, Beetox juice, Mr. Green Genes juice and two raw coconut macaroons for the road. I’m saving the Beetox juice and Mr. Green Genes for tomorrow. I am gradually preparing myself for a juice cleanse at the end of the month so I am planning on juicing more for meals. I think what will be one of the most difficult things to cut ahead of time is chocolate, but so far today I’ve done well. Next thing is to cut out anything with nuts.

After hanging out at Wildflour for a bit, reading, talking to the employees there and fighting the craving for some raw cheesecake I headed over to Whole Foods. I was really bummed out to see that the papaya this time around wasn’t good. I really love the Tropic Goji drink by Sarma but getting good mangoes and papaya right now is a battle.

I picked up a few ingredients to try out some cleansing juices from a raw uncookbook that I recently picked up called “The Raw Truth,” by Jeremy A. Safron.

I also found GT’s Synergy Chia Kombucha and did a little dance in front of the case. There is this drink called Mamma Chia that I wanted to try until I saw the ingredients. It has way too much sugar in it, it’s sweetened with agave nectar, which probably isn’t needed since the drink looks sweet enough, & it has also been pasteurized. GT’s Synergy Chia Kombucha is just raw kombucha, raw chia & raspberry juice.

I picked up the raspberry and cherry flavor, so far I have opened the cherry and I am surprised at how much I love this drink. I typically don’t go crazy over cherry candy, juice and so on but the taste is like actual cherries so it’s fantastic. The chia seeds are plump from being submerged in kombucha and juice. They taste kind of like baby pomegranate seeds and disguise the vinegar taste of kombucha, if you have tried kombucha before and disliked it you might actually like this drink. 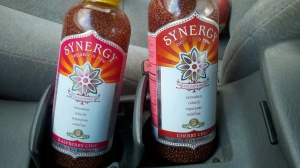 At Whole Foods I spent $3.69 on each chia kombucha drink, the same price for a kombucha without chia. I am hoping that stores closer to my town will start carrying this product. It’s amazing to be able to receive the health benefits from both kombucha and chia seeds at once. Chia is loaded with omega-3, antioxidants, fiber, calcium, and protein. Kombucha is also high in antioxidants and has all the good bacteria we need to help regulate our bodies internally and externally. There are tons of enzymes in kombucha working to promote healthy hair, skin, nails, liver, and any energy boost. I love drinking kombucha after yoga; it tops off my yoga high. 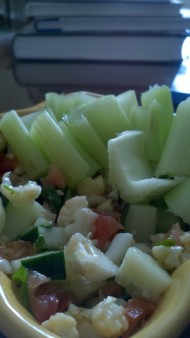 I had a light dinner tonight because I wanted my stomach to have enough time to digest everything before yoga class. So I threw together a raw tabouli made out of cauliflower, cucumber, tomato, parsley, flax oil, olive oil, garlic, and my sea salt veg mix by Maine Coast. The pieces of cauliflower and cucumber should never be this big but I was in a rush :x. I used pieces of celery to scoop up the tabouli. The taste was fantastic, super refreshening and lots of juicy and crunchy veggies to satisfy my cravings.

Random news find of the day:

You will most likely find wood cellulose labeled as microcrystalline cellulose(MCC). It’s actually not required for this to be on the label at all, it’s one of the many things somehow listed as “containing organic ingredients.”
What brand names should you be wary of? Kellogg’s, General Mills. and Morning Star. There’s wood in mozzarella sticks, ice cream, eggo waffles, and much more.
Please read this article and spread the word.
xoxo