Some Of My Favorite Juice Recipes <3

I’m that person at the beach drinking a tall glass container filled with what looks like blood or some sort of green thing that on-lookers stop and try to figure out what the heck is that. At work I bring juices, sometimes people ask to try a sip or they tell me it smells good. I’ve gotten all sorts of mixed looks and reactions from people. But one thing is for certain, juice gives me energy especially when it has beets in it…I feel like I have those sonic red shoes that help you speed through the rest of the level. Raw Power!

It’s amazing how great it feels and I totally give juice credit for being the reason why I was able to quit coffee.

So when you hear the word juice there may be a couple of different things that come to mind. But when I say it I mean fresh made juice, from a juicer or squeezer. To me, when I hear smoothie I think of something that’s been in a blender such as mangos, nut milk, bananas, any berries and other fruits that can not go in a juicer. I usually juice kale, romaine, dandelion greens, whole lemons, celery, beets, cucumbers, ginger, spinach, apples, papaya, pears, and an insane amount of other things. My juicer can not handle herbs so I have to blend those with water and mix it with my juice afterwards. I’m a huge fan of parsley in my juices!

I make one juice that has more greens than the other, and I try to not juice similar greens in the same day, e.g. spinach and kale. This way a full spectrum of vegetables is being used. One combination I like to make is very cleansing and is loaded with greens; cucumber, celery, kale, romaine lettuce, dandelion greens, carrots and about an inch of ginger. Every once in a while I add cayenne into the mix too.

One of my ultimate favorites also is a juice I like to have for all morning until I have lunch. It’s a Green Lemonade that also happens to be cleansing and is refreshing. 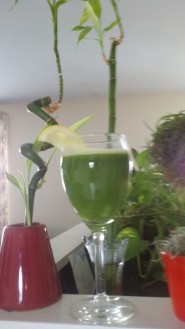 1 Fuji Apple (more or less according to your person preference)

I’ve heard of recipes like this where celery is used instead of cucumber and pineapple instead of apples. I honestly change things up every so often since I juice everyday and sometimes I already have some extra of something left over so I have tried these other options too. All of them are really tasty so it’s worth playing around with.

I think the runner-up juice is Just Beet It. This is the juice that makes me feel like I am Sonic in super mode. I tend to make this one almost everyday since it has really helped with those moments where I wish I had caffeine. A little heads up if you don’t typically consume beets, if you aren’t very hydrated beets can change the color of your urine and for a fact it will make your poop beet colored too. So don’t freak out when you go to the bathroom and you notice that your waste doesn’t look like your waste. Beets are an awesome blood purifier, it may increase your blood flow, it’s great for clearing your skin, and is perfect for anyone who lacks iron or is anemic. Just Beet It, ignore the fact that it looks like you are drinking fake blood. The juice looks so bright and beautiful; it only makes sense that it will have that effect for your body. My friends like to joke that my insides probably look like a rainbow, I take it as a compliment 😀 Lucky me! 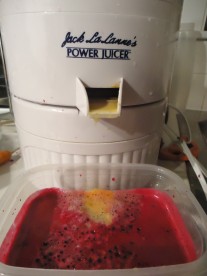 1/2 Fuji Apple (I use Fuji apples since I like their sweetness and it isn’t tart, but you can use your apple of choice)

I was happy to find some lovely mixed peppers and yellow tomatoes at the Farmer’s Market as well! They were so tiny I had to buy them. These goodies are too cute…I have to show you a picture. I feel like a mother showing baby photos. 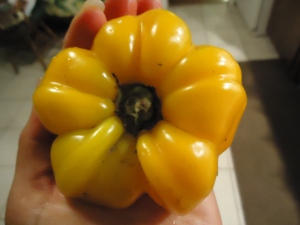 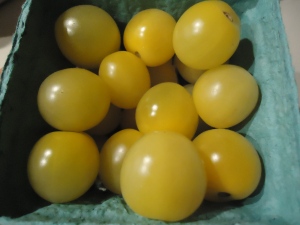 One thought on “Some Of My Favorite Juice Recipes <3”